I moved to Sydney, Australia in 2009, to pursue a contract as a RN. I absolutely loved it there! In 2012, I took some time off to come home to Chicago to be in back to back weddings. My first week home, I attended a friend’s birthday dinner and in walks my teenage crush-Ryan Celestino. I felt like I was 16 again, but kept my composure on the outside. A month later, Ryan asked me for my number and we went out on our first date, where he shared that he had always had a crush on me. I couldn’t believe it! We had a wonderful summer, but I had to go back to Sydney to work. I worked five more months of my contract, but decided to go back home to be with Ryan and see where a relationship would take us. Unfortunately, within only three weeks of being home, Ryan and I parted ways. It was quite devastating for both of us; we loved each other but Ryan had things going on in his personal life that he wanted to battle alone.
After a few months, he had overcome those personal battles and wanted to work things out. I was still too angry and hurt and didn’t want to give it a chance. He did everything he could to at least be a friend or be a part of my life but I resisted. In fact, I even told him that I didn’t even love him anymore when he asked me if I still felt the same about him. A month after this happened, I realized that I didn’t ever want to wonder what would have happened if I had just given us another chance. I decided to do just that, and I am glad that I did. A year after we got back together, he proposed and then we got married a year later.
Our wedding day was truly a celebration of everything that we had overcome to finally be together. We had a Catholic ceremony with Filipino traditions. The coins and cord we used were the same ones my parents used at their wedding ceremony 38 years ago in the Philippines. We got married at the church where I grew up-St. Benedict Church in Chicago. The ceremony was full of laughter, tears, and so much joy. I waited until our wedding vows to tell him that I had been secretly in love with him for as long as he had loved me. HAHA! I will never forget his face or how the rest of what I said overwhelmed him and brought him to tears.
A Chicago trolley took us to our downtown reception at Venue Six10 on Michigan Avenue overlooking Grant Park and Buckingham Fountain. We had a gold and champagne reception with a sleek and modern look. The floor to ceiling windows allowed for us to see the fireworks show at Navy Pier to start the dancing for the night. There was nothing more fitting for this glamourous city affair than the one of a kind couture wedding gown by Hayley Paige. The Remmington was the last dress I tried on, and I knew that it was the one. The skirt gave it a romantic look, but I knew I needed more. Lucky for me, I got the best of both worlds from two of Hayley Paige’s line by adding the Elysia skirt to the Remington corset to create something custom made just for me. Everyone loved it, but more importantly, Ryan did. I cannot thank Hayley Paige enough for allowing me to have this one of a kind dress! The dress was truly representative of the event that we had. You are a truly remarkable designer! THANK YOU! 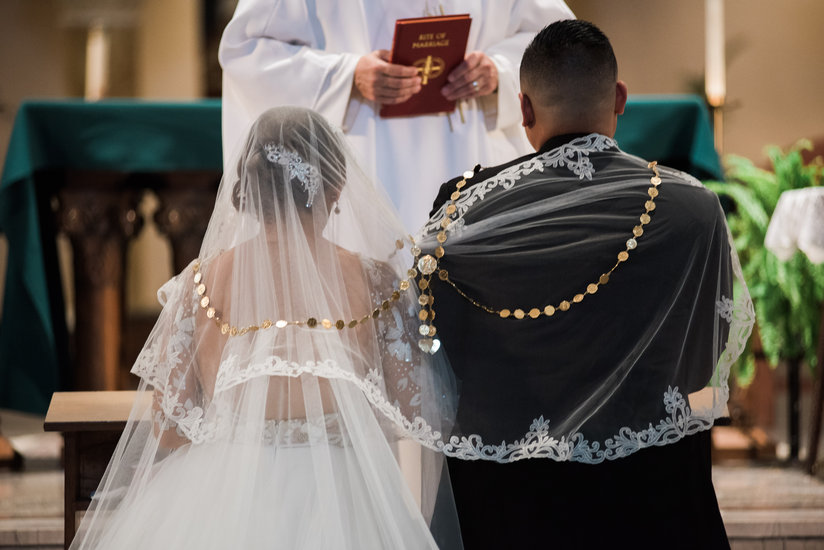 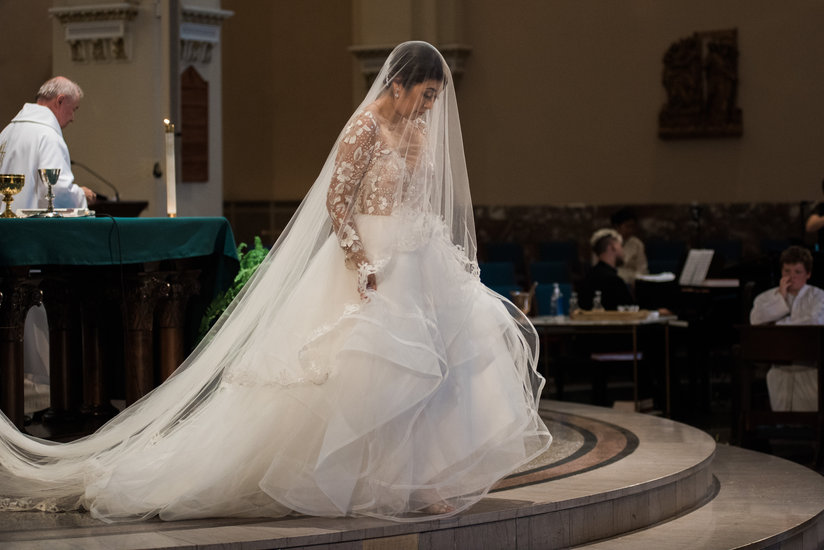 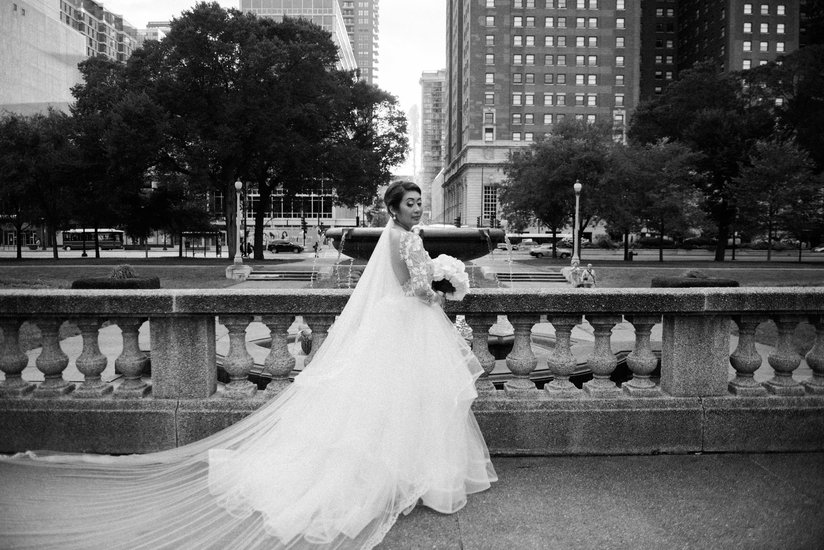 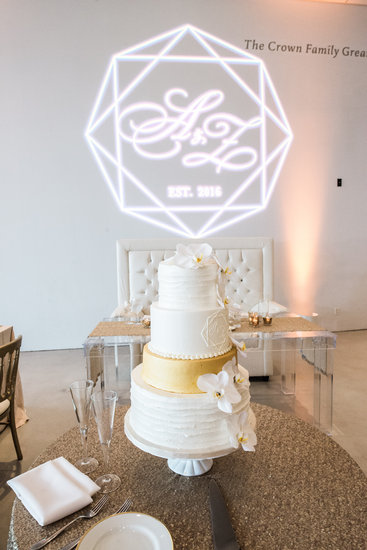 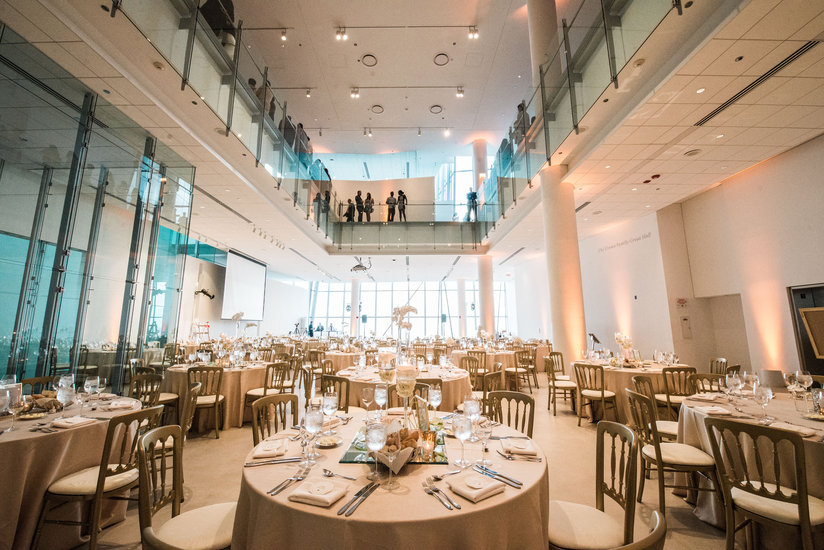 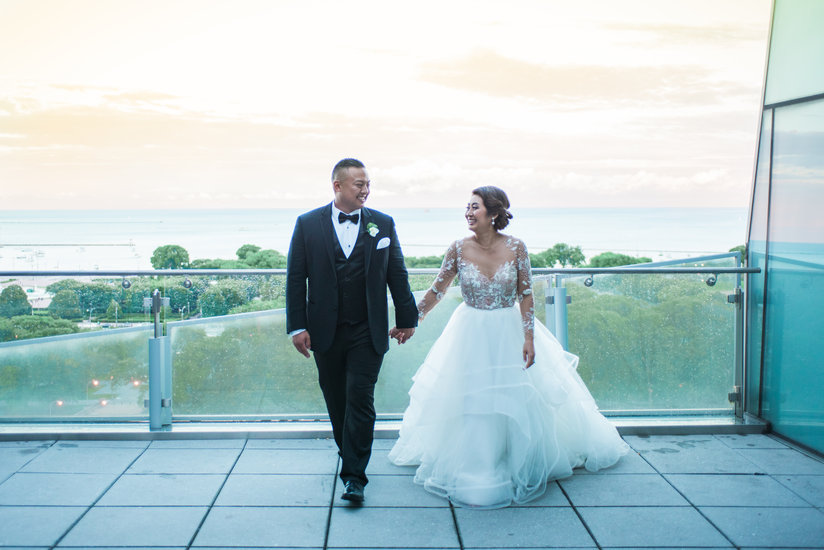